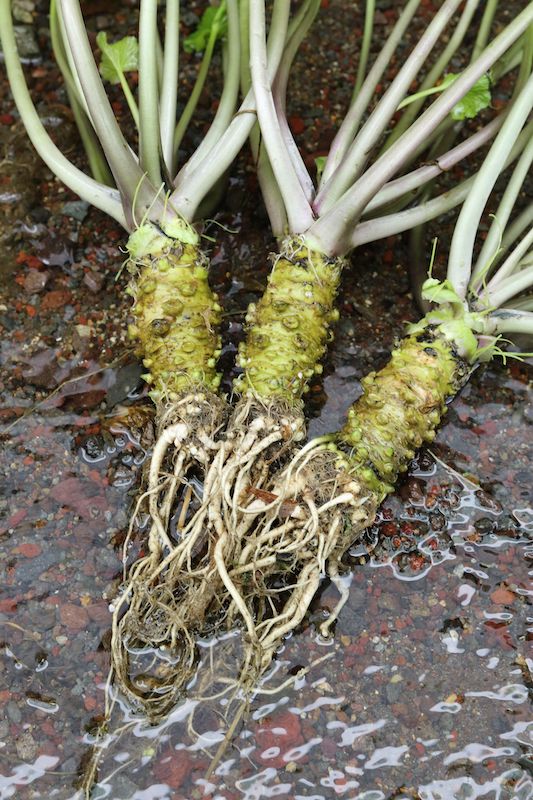 The long history of Wasabi (Japanese horseradish) has been rooted in the Japanese culture and in present day, is familiar to any Japanese person. From a technical aspect of the plant, it is classified as a member of the Wasabi genus of the Brassicaceae family, and its scientific name is “Wasabia japonica Matsumura”. As its scientific name is given “japonica” meaning Japan, Wasabi is said to be a plant native to Japan. The latest chloroplast genome analysis confirms that Wasabia japonica is native to Japan, although the classification of plants and the presumption of origin may change with research advancements in the future.

Wasabia japonica” is a native species in Japan. In this article, I would like to share the history and basic knowledge with “Hon Wasabi”.

Hon Wasabi and Horseradish has been used as a “Japanese medicine” for a long time and has been associated with people’s health.

The parts of Wasabi that are used as Japanese medicine are the rhizome and the leaves. The rhizome is called “sankikon” and the leaves are called “sanyuna”. In the world of internal medicine, Wasabi has been valued as a “stomachic” (appetite stimulation) and also has antiseptic and antibacterial properties. It is also said that the pressed juices were used to remove poison from fish. However, it was said that people with gastritis or stomach ulcers should not use wasabi due to its strong stimulating properties.

Wasabi was also used as a topical remedy for rheumatism and neuralgia. Grated wasabi is spread thinly on a cloth and applied to the affected area and removed after about 10 minutes. Past studies have shown to decrease pain for the affected area. Current studies have only further supported what our ancestors have already known.

Horseradish has been used for medicinal purposes in Europe since the Middle Ages. As an oral medicine, grated horseradish combined with honey is effective for coughs and asthma, and is also used as an expectorant (mucus thinner) to relieve breathlessness, bronchitis, costochondritis, and pneumonia. It was also used to treat bronchitis, costochondritis, pneumonia and many more. It also had diuretic properties and was effective in treating edema, gout, and urinary tract stones.

Horseradish was also used as a topical medicine. When the root was grated with cornstarch and applied to any inflammation with a gauze, blood was pumped into the inflamed area and the symptoms were alleviated. However, this method causes irritation on the skin that resulted in blisters in some cases.

It is interesting to note that both “hon-wasabi” and “horseradish” were used in the same way, though in different countries and regions. In recent years, the physiological functions of Wasabi have been scientifically clarified and proven, and continuous researches further brings out its functionalities and benefits. There are still much more discoveries to be made with the “Power of Wasabi”.

The hidden benefits of Wasabi Sulfinyl®

A health component called 6-methylsulfinylhexyl isothiocyanate (6-MSITC) has been discovered through years of research on wasabi. It is a type of mustard oil found in wasabi. Since only a small amount of 6-MSITC is contained in Wasabi, it has been concentrated and refined into a convenient form called Wasabi Sulfinyl®.

Since Wasabi is very pungent, it is not possible to eat a large amount of it at a time. Therefore, research on how to remove the pungency from Wasabi and extract Wasabi Sulfinyl® efficiently was conducted, and the extraction method was established.

Wasabi Sulfinyl® has been confirmed to have many health benefits such as detoxification, antioxidant and blood flow improvement. Among them, Wasabi Sulfinyl® was found to be one of the strongest vegetables in activating GST (Glutathione-S-transferase), one of the detoxification and metabolism enzymes in the liver. Detoxification metabolic enzymes are enzymes that detoxify foreign substances such as carcinogens and convert them into a form that can be easily discharged from the body. Activating these enzymes is said to lead to the prevention of carcinogenesis. Furthermore, the latest research has confirmed that 6-MSITC improves cognitive function by inhibiting brain damage. 2020 saw the acceptance by the Consumer Affairs Agency of a product containing Wasabi Sulfinyl® as a functional food that improves “alertness and judgment,” and is slowly gaining acceptance and usage in areas outside of Japan.