With the continuing threat of new coronavirus infections, the importance of our daily lifestyle, especially our diet, is being pointed out. There is a need for modern people to enhance our biological defense capabilities, such as our immunity, antioxidant and detoxification capacities. Our research group focused on the functionality of “phytochemicals. We first focused on sesame seeds, and then expanded our research to include the functionality of a wide variety of food ingredients, such as wasabi, turmeric, other herbs and spices, fermented foods, and sprouts.

Background of Functional Research on Wasabi

The research on “Hon Wasabi” started when Professor Kojiro Morimitsu of Ochanomizu University was a graduate student in our laboratory at Nagoya University. Wasabi contains many kinds of isothiocyanates, which are pungent components, and the isothiocyanate with the highest content is allyl isothiocyanate (AITC), which is the central component of Wasabi’s pungency and stimulating taste. Recently, 6-Methylsulfinylhexyl isothiocyanate (6-MSITC) has been attracting attention as a functional ingredient. 6-MSITC has a variety of functions, including antioxidant, induction of detoxification metabolic enzymes, anticancer, anti-inflammatory, and anti-cancer effects. 6-MSITC has been confirmed to have antioxidant, detoxifying metabolic enzyme induction, anticancer, anti-inflammatory, anti-diabetic, and anti-allergic effects (*1). In the latest research, a research group led by Professor Masayuki Yamamoto and his colleagues at Tohoku University has elucidated a new functionality of 6-MSITC in improving dementia such as Alzheimer’s disease (*2).

The first of the main functional properties of Wasabi is its powerful antioxidant properties. They make up more than half of white blood cells and play a central role in the early detection and treatment of viruses, bacteria, and molds that have invaded the body. Mieroperoxidase (MPO), produced by neutrophils, plays a protective role against invading microbes by producing radical oxygen species (ROS). Excessive ROS can cause genetic damage, inflammation, and aging of tissues and organs in the body (Fig. 1). 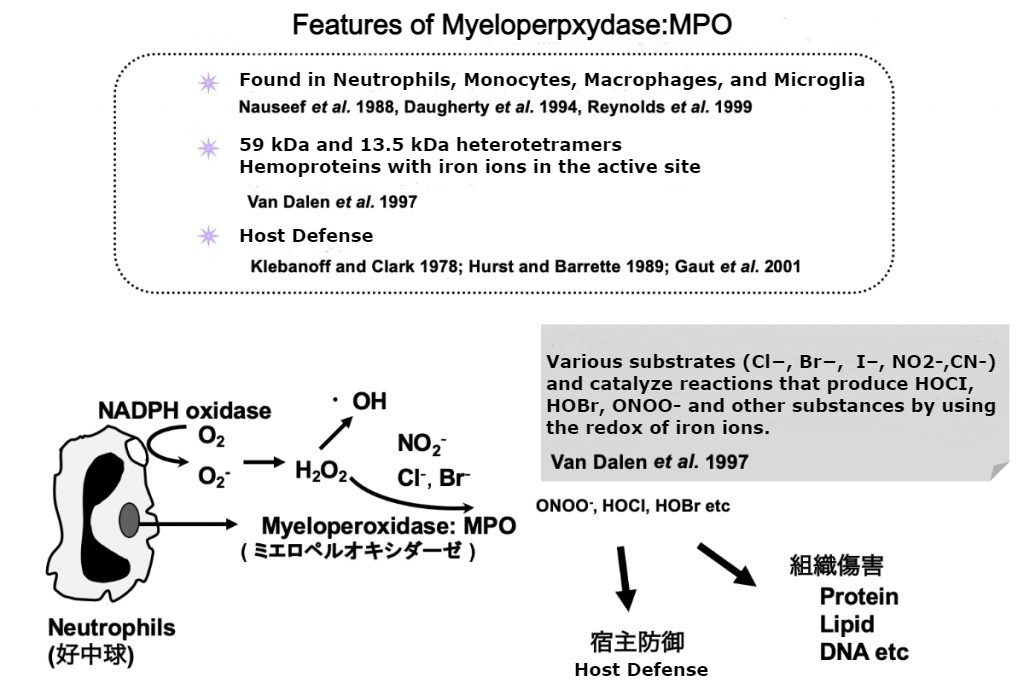 The body is equipped with mechanisms such as SOD (Superoxide dismutases ) to eliminate excess ROS, but this function is said to decline with aging. Therefore, enhancing the ability to inhibit ROS is considered important for the prevention of aging and dementia, etc. It was suggested that 6-MSITC acts on the ROS-producing sites of neutrophils to inhibit ROS production itself, rather than directly eliminating ROS produced by the stimulation. Studies with benzyl isothiocyanate (BITC), a typical isothiocyanate from papaya, conducted by Professor Yoshitaka Nakamura at Okayama University while working at Nagoya University, suggested that BITC modifies cytochrome b558, a NADPH oxidase complex on the leukocyte membrane. 6-MSITC is also thought to exert an effect on the same site (*3). 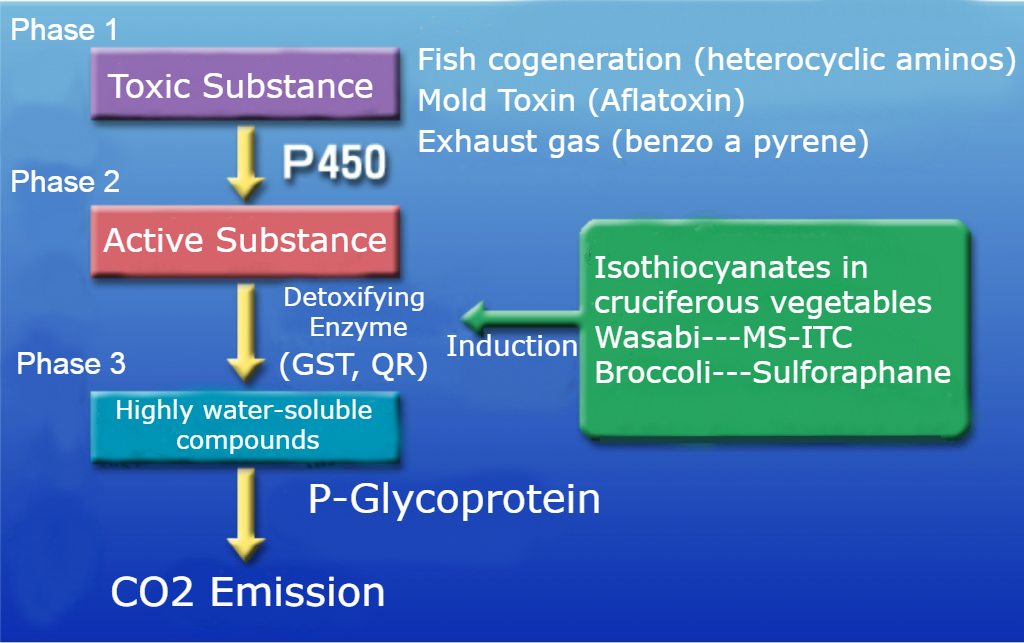 6-MSITC acts on the transcription factor Nrf2 (NF-E2 related factor 2)/Keap1 (Kelch-like ECH-associated protein1) system and is known to stimulate transcriptional expression from Antioxidant Response Element (ARE is known to enhance the expression of phase II enzymes such as GST and NAD(P)H quinone reductase (NQO1) by stimulating the transcriptional expression of GST from the ARE. Professor Morimitsu and his colleagues conducted a screening of GST-inducing activity in vegetables, mainly Brassicaceae, but also Liliaceae, Araliaceae, etc., and reported that among 20 vegetables, wasabi had the highest GST-inducing activity (Figure 3) (*5). 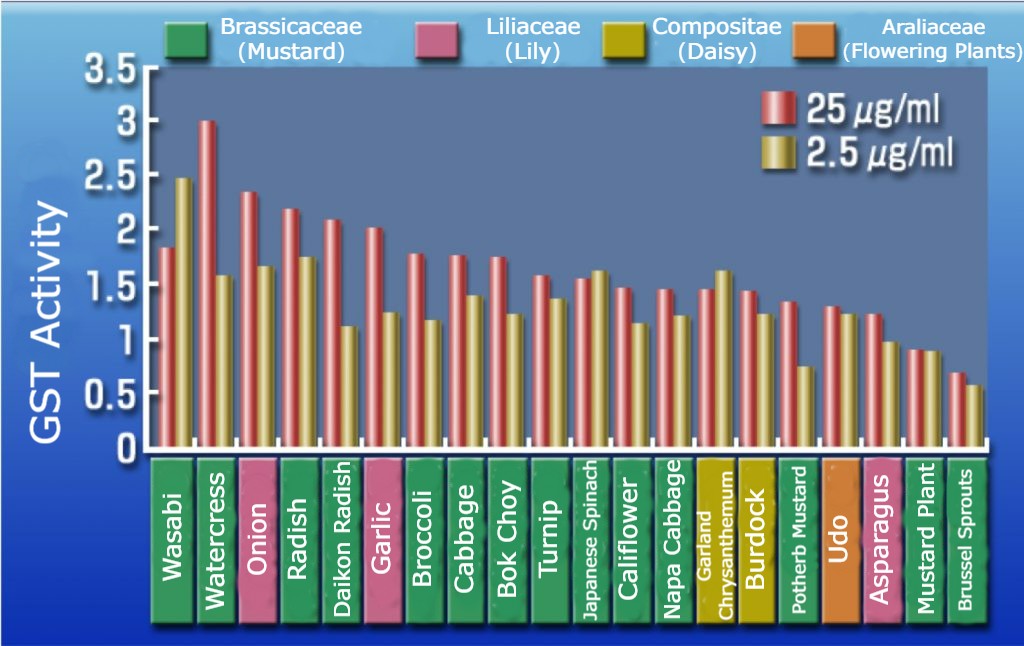 For modern people, who are inundated with various kinds of stress, enhancing immunity, antioxidant power, and detoxification is an important method of defense. Recently, attention has also focused on the link between “frailty” and “free radical damage,” which has become a major problem for the elderly, so further research on the effects of Wasabi is expected to progress (*6).