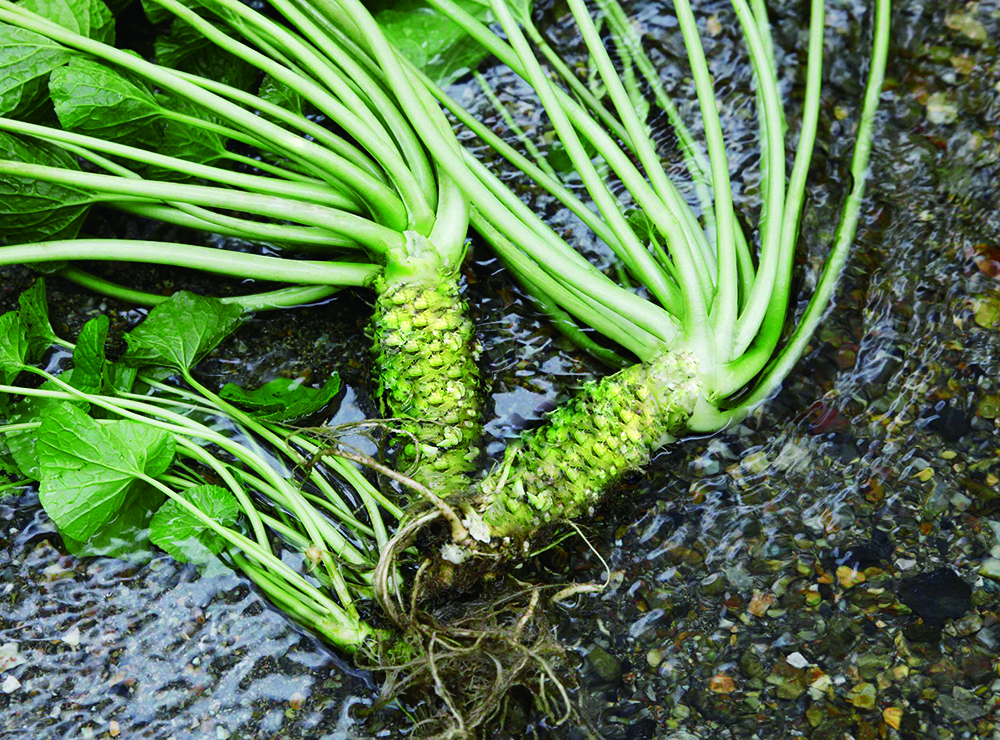 It is said that wasabi first came to be cultivated in the early Edo period (1603-1868). During the Keicho era (1596-1615), Utogi (now Shizuoka City) on the upper reaches of the Abe River was opened under the leadership of Rokuroemon Mochizuki, which is said to be the beginning of the history of wasabi cultivation. In the late Edo period (1603-1867), nigirizushi (hand-rolled sushi) with wasabi on it was invented and became popular among the general public as a result of a boom in the city of Edo (present-day Tokyo). In response, native varieties of wasabi were cultivated throughout Japan, and by the early Showa period (1926-1989), full-fledged cultivated varieties were also born. In the early Showa period (1926-1989), a full-fledged cultivated variety was born.

In this issue, we will try to unravel the roots of wasabi.

The Roots of Wasabi Explored through Genealogy

Wasabi can be classified into two types: “blue-stemmed” and “red-stemmed. Blue-stemmed wasabi tends to have green, upright stems. The rhizomes are also green, of good quality, and grow vigorously. The representative variety is the “Daruma” type. The “red-stemmed” variety has reddish stems with thick, flat stems. It grows slowly and tends to be pungent. The representative variety is “Mazuma”.

The Daruma strain is characterized by its elegant pungency and mildness. It has green stems and rhizomes, and can be grown for one to one and a half years, making it a faster growing and easier to cultivate strain than the red-stemmed variety. There are many varieties, including those that have been selected and bred over its long history. It is cultivated using seedlings grown from seeds.

The Mazuma variety has a strong pungent taste with a light sweetness, and has an excellent aroma and consistency. The stems and rhizomes are reddish-purple in color, and the cultivation period is one and a half to two years or more. It is grown from mericron seedlings through nutrient propagation, which grows seedlings separated from their parents, and biotechnology to maintain quality.

These are varieties bred from the vigorous growing Daruma line, mainly for field wasabi cultivation.

Cross-breeding between the Daruma strain and Masazuma

Many wasabi farmers are trying to develop a variety that combines the fast growth and beautiful green color of the Daruma strain with the strong aroma of the Mazuma strain.

Breeding of the Mazuma strain

From among the Mazuma cultivation plots, those with vigorous growth, disease resistance, and less redness are selected and bred.

A search of the MAFF database reveals 22 registered wasabi cultivars. Of these, four varieties are still under breeder’s right and two varieties are under application. Because the suitable cultivation environment (water temperature, water quality, sunlight conditions, and seasonal weather conditions) for each variety and strain of wasabi varies slightly, it is often the case that a variety that is excellent in one production area does not grow well in another area. For this reason, the number of registered wasabi varieties is small, but it is said that there are more wasabi varieties than the number of farmers in each region that have selected their own varieties.